« Back to My Blog

I take the Grandson to Finding Nemo on Ice! 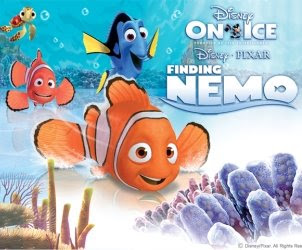 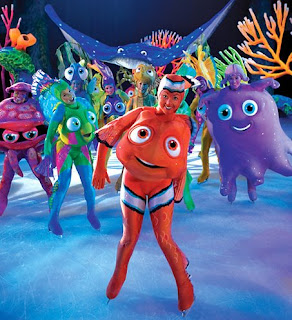 Fortunately it was only for the two nights as they were up here to go and see the Finding Nemo on Ice Show at the NIA in Birmingham on Saturday. When they asked me to book tickets for the show, there had been a couple of previews on the TV and I thought it would be fun to go with them and enjoy a night out with my grandson, as I don't see them very often. I was horrified to realise that this time it had been a whole year since I'd last seen them! 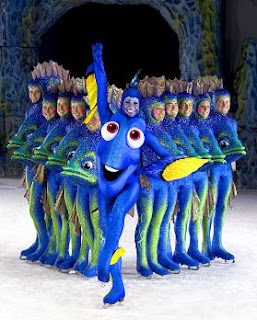 My daughter drove us into the city using her satnav and we arrived in plenty of time, I think the volume of traffic surprised her as she thought it was rush hour. I explained that the traffic was always that busy as Birmingham is the 2nd city in Britain, so it's very like London traffic. She's not used to driving in traffic like that as she lives down in sleepy Devon. But she coped very well, even when several lanes of traffic converged from different directions as we approached the NIA and all wanted to join the one she wanted, particularly as it was a very dark and wet night, making conditions difficult. 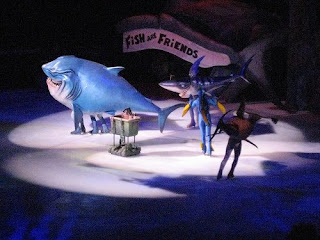 The show was fantastic, with wonderful costumes and great skating. There were two entrances at one end of the large ice rink with a large screen between them, on which was projected appropriate scenes from the movie. From the moment the characters of Nemo and his Dad appeared on the ice after an introductory scene from Mickey, Minnie, Donald and Goofy, it was clear that to my 5 year old grandson they were real. The very fact that it was clearly a woman on ice skates wearing an oversized Nemo belt didn't register. He just soaked up the spectacle of colour, movement and music ? and all were there by the boat-load.

The sets were impressive with plenty of eye-catching pyrotechnics when required (grandsons reaction was 'awesome' when we all jumped the first time one went off) and some neat high-wire stunts to get the kids 'oohing and ahhing' on cue - the pelican was particularly fun! The menace was provided by a giant shark and whale but, without wanting to give away the ending, they left the set without satisfying their hunger pangs, while being pretty impressive.

What is it with Teenage Boys?

It's been 4 weeks since the Boy Wonder moved in with us and I think we've only seen him a couple of times! Well that's what it feels like, as he spends all his time up in his bedroom, and most of it is spent on his laptop playing World of Warcraft. Well he is 17, and apparently this is fairly normal behaviour for this age! At least according to my friends at work who also have teenage children, particularly boys.

I think poor hubby had this idyllic vision of the two of them spending time together and bonding - yeah right! He has however, been sadly disillusioned, particularly now the first few weeks are over and he can see what the future holds. The first week he took time off work to run around various colleges, training centres & job agencies with the BW, trying to organise him into the world of work or get some training.

He had been accepted by an agricultural college for a course in animal management (I think he had ideas about working in a zoo or somewhere like Woburn) but at the very last minute he changed his mind and decided he didn't want to do it (Don't you just love them?) but he has no idea what it is he does want to do - if anything!

Unfortunately with the recession looming large this is not the ideal time to be job searching. He does have about 12 GCSE's so he's not stupid, just aimless and I think hubby has got fed up of being the one doing all the 'driving' and decided to just get Christmas and New Year over with before giving him a kick up the proverbials.

At least he's not costing us a lot to keep at the moment, which is one way of looking at it and we only see him at meal times :-)Unfortunately he is occupying the room that used to be my study and I had to clear out all my books etc. Two large bookcases, which we managed to accommodate in the other two spare bedrooms, the smaller of which we use as an ironing room and the larger of which is my dressing room, which doubles as a guest room. However I still have a large stack of boxes of books, papers, photo albums and other paraphenalia piled on the sofa bed and on the floor, so when my daughter came to visit with my grandson for a few nights at the weekend, I was unable to accommodate them in that room, so they had to sleep on the sofa in the lounge!

It's pouring with rain again today, the weather people told us we would have a month's rain in one day and I believe them! The trouble is we have already had so much rain this year that the ground is waterlogged, (August was the wettest on record - so hardly surprising) so there is going to be a lot of flooding later. There is already a lot of surface water laying on the ground. And the weekend forecast is pants as well!

'Im just glad we're not going away this weekend, as it could have been as disastrous as July, when we had to cancel a week in Devon as the weather forecast for the entire week was so awful! I have all my fingers and toes crossed it will perk up by the end of the week ( she says optimistically!), as we can't  cancel this time as we have paid for the entire holiday in advance.

We have a river running along the bottom of the field behind us, which has been known to flood quite badly in the past. But I think we should be ok as we are at the top of the slope, so there's little danger of it reaching our house, although the houses lower down were flooded a few years ago. The problem later tonight will be getting home if the flooding is bad!

The Boy Wonder is coming to stay for the week, arriving on Saturday (tomorrow!) we think (typically nothing has been finalised!). He informed his Dad that he really didn't want to go to the College he'd been accepted for, (he was due to start an animal management course in a few weeks). And could he come and live with us for a while as he'd fallen out big time with the Mother, and Step-Father (now that one I can understand!)

We said he could come for this week, but as we were off on holiday the following week, he would have to find an alternative. So it was arranged that he would be staying with his sister in Manchester for that week, and then come back down to us for however long (how long is a piece of string?!).

t looks like we may be off the hook however, as Hubby rang last night before he got home from his installation trip, and told me he thought things had calmed down with the Mother, and he might just be coming for the one week - Hallelujah! Don't get me wrong, I really like my stepson, he's a nice lad, I just didn't fancy having to cope with a 17 yr old's social life for the next few months - not to mention helping him sort out what he's going to do with the rest of his life!